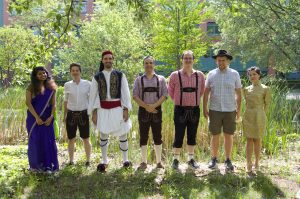 Genomes contain the entire information needed for building complex organisms such as members of our own species. Genomes are also the substrate of evolution and influence how fast species can adapt to changing or novel environments.

It is our aim to shed light on these open questions and to identify the factors driving the evolution of genomes. We think that this will contribute to a deeper understanding of evolution and thus also to the forces that shaped our own species.